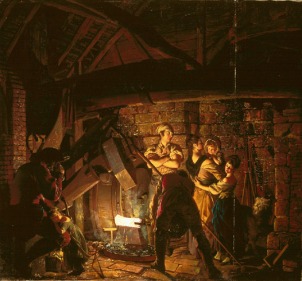 J. Wright of Derby is known as a painter of portraits and small genre pictures. One of his favourite themes must have been that of the forge which he painted and re-painted in several versions between 1771 and 1775. Although having the same theme, these versions vary in that some of them, such as Wright's two drawings made in 1771 (Royal College of Surgeons) and 1772 (The Mountbatten Collection) show no human figures at all.

Wright was so obsessed with the theme that he even noted down in his "Memo Book" - just like a cook giving a list of ingredients for a recipe - all the essential details that should or may be represented in the picture. He mentioned the figures and their positions (e.g. one of them should be in a lazy, idle posture, crossing his arms etc.), objects on the wall, the light of fire and even the moon as a possible  additional light source.

The version painted in oils in 1773 is an interesting combination of an exterior and an interior scene.
Outside is a dark late night landscape. Full moon notwithstanding, the scenery is hardly illuminated, for the moon is darkened by the clouds and is also partially eclipsed by the chimney of the forge and the black smoke ascending from it. Despite the darkness, however, all the typical elements of a landscape representation can be observed: the cloudy sky, shadowy trees, a hill, and a winding stream.
The interior of the forge may appear as if it was another picture within the original painting. (This is similar to techniques which involve invisible walls and objects to reveal areas that are normally obscure.) The place is brightly lit by the fire which itself is not visible. Wright worked out every detail with meticulous care including bricks in the wall and the texture of the wooden structure. Some easily recognizable objects such as the anvil and the huge hammer help us immediately identify the theme as the forge.
The figures are standing around the fire. Each has a different posture, yet they all seem tired. Perhaps it has been a hard day; the moon is up and they are still working. Strangely enough, it is not only the postures of the figures that expresses exhaustion but their faces, too. In addition, Wright was able to capture the contemplative state of mind and the calming down which is kindled in most of us by the sight of fire or burning embers.

Perhaps one of the reasons why Wright painted and re-painted the forge was because through this theme of his he could experiment with artificial light which fascinated him very much. (According to Bemrose, his biographer, Wright devised and built special machineries to study artificial light and its artistic effects.) The version painted in 1773 is a good example, for it can also be regarded as a study of lights and shadows. Even though we cannot see the fire, we know exactly where it is. Shadows on the wall, for instance, are painted in such as way that they all "point" at the light source hidden by the forge-man's body. It is because of these special effects that the fire cannot be visible, otherwise shadows would be of much less importance. This elaborate system of bright and shaded parts also conveys the flickering nature of burning fire; shadows do not at all seem stationary.

Another great achievement of Wright's painting lies in the opposing relationship between the interior and the exterior scenes. The landscape in the background is dark; it has diffuse light, no sharp shadows, no human figures, whereas inside the smithy there are people gathered around bright light which is, as it were, leaking out through the windows and the slits of the building. The opposition is apparent. The dark-blue tones and cold colours outside contradict the lighter and warmer hues of the inside. Both natural and artificial lights are present at the same time, but it is the latter that dominates the painting.
Wright also excelled at "painting temperatures". He knew very well that diffuse light and blue tinges imply coldness, while the shades of burning fire, and light which radiates from one point and casts shadows, suggest warmth. This is even more perceptible when the two different sets of hues and light effects are in contrast as in Wright's picture. From this point of view, the dark background plays an essential role and should on no account be omitted from the painting.

We can move on and try to analyse the picture at a symbolic level. One such interpretation is the relationship between nature and mankind presented as natural light and the landscape as opposed to artificial light and machines. Both are frightening in a way: nobody would like to be outside the forge in the dark; but it is also a bit scary inside because of the ghostly light and weird shadows. Still people would prefer to be inside; they are working while nature is asleep.
This throws up another, maybe a little far-fetched, interpretation. Although we cannot see the fire, the mysterious power that creates and destroys, we know it is there in the middle, and it is obvious that something is being born on the anvil (the tones and the atmosphere are somewhat reminiscent of representations of the religious theme of Christ's birth) The colour of the flames resemble the colour of the rising sun at the dawn of a new age: the Industrial Revolution.

All this shows that Wright's painting is not just a simple genre picture or merely a good study of lights.
It is more than that.
Perhaps a masterpiece.